So, I noticed recently an uptick in my readership, which I don’t understand because I am awful at this blogging thing. Considering we are now a month out from our Spring tour, I thought it was about time to write about our Fall tour of the West Coast.

Per usual, if you want a detailed account of the tour, you should check out my wife’s blog here. This was a tour I was especially looking forward to for a number of reasons – first, the West Coast is a beautiful part of the country that we love visiting (we plan on retiring to the Pacific Northwest); second, we were going to be able to see some friends and family; and third, the planned recording session at Skywalker Sound. Yes, you read that right…

We took three programs on tour:

The Army Story: A program that the Band has been playing (with adjustments along the way) for over year. It’s a chronological journey of the history of America through the lens of the Army. Combining multimedia with appropriate music and narration, it continues to be a crowd favorite, and as many times as I’ve seen it, I still find it moving.

America, the Beautiful: A new show for the Fall that I conducted. It basically speaks to the beauty of our country with (this time) a focus on the West Coast. A great theme that can easily be adapted for different parts of the country.

Soundtrack of the American Soldier: This program was created specifically to prepare the Band for the recording session we had planned at Skywalker. The music for this program and recording was selected from military movies such as Patton, Saving Private Ryan, Sergeant York, and American Sniper among others. Also featured were two commissions by film composers Laura Karpman and Joshua Moshier. It was born out of the realization that the way people most learn about the military is through TV shows, movies, and video games. This was our attempt to work with the people who are telling our story.

The first couple of days of tour were highlighted by visiting with my brother-in-law and his family in Spokane, WA. Spokane is a cool city with a good arts and dining scene and it was great to have family make it to a show I was conducting.

After three concerts on the east side of the Cascade Mountains, we made our way over the pass to Seattle. 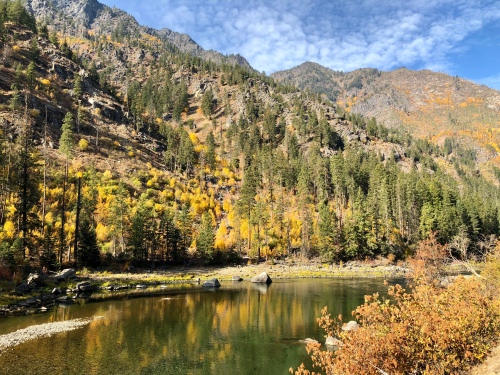 Once on the other side of the mountains, we had our concert in Seattle at the Federal Way Performing Arts Center. Thankfully, my best friend and his kids were able to make it! 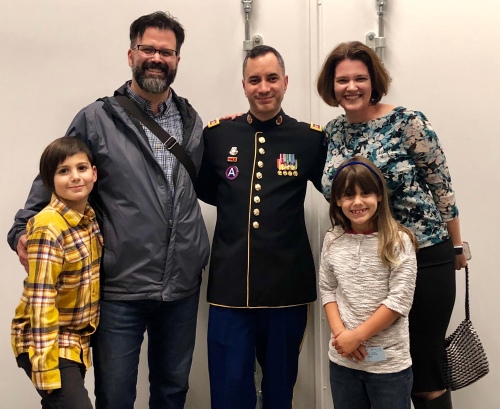 With Brian, Lincoln, Darwin, and Anjali.

The next day we were able to spend time with them before heading south to Bend, Oregon, which is a beautiful town that reminds me of Aspen. Spending a day in Bend, I can see why so many like to visit (and live) there. I wondered what the crowd would be like at our concert but it was completely packed with an appreciative audience. 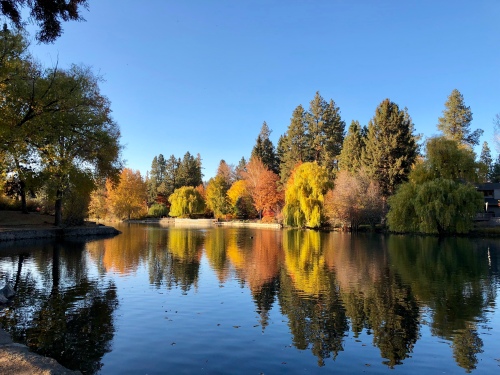 We had one more concert in Oregon (Medford) before crossing the state line into California. We had concerts in Folsom and Yontville and an opportunity to visit Sacramento, which was fun. However, it was time for the recording session at Skywalker Sound.

Why record during tour?

Why record at Skywalker Sound and not in the Field Band’s facility?

Why do the New England Patriots win every year?

A lot of military bands make recordings. What we didn’t want to do was make a recording that would have the shelf-life of a gnat and not really say anything new; we wanted to do something unique for military bands that would build on the foundation we had laid last year with the Bernstein recording and our work with Grammy-nominated producer and all-around great guy, Dan Merceruio. We also decided early on to tackle an immersive audio (or surround sound) recording, but to record in immersive audio on the front end rather than manufacture it in post production. We not only needed Dan’s expertise and ear, we needed a facility and recording engineer with the knowledge and equipment to pull it off with such a large ensemble…someone like Director of Music Recording and Scoring at Skywalker Sound, Leslie Ann Jones.

All I can say is that those five days of recording were some of the best times I’ve had as a professional. Leslie and Dan were amazing to work with; the staff at Skywalker were incredible; and the Band and Chorus delivered. It was also great to have a number of the composers there – Joseph DeBeasi, Mark Isham, Joshua Moshier, and Tim Simonec. (I think we all suffered from withdrawal after being immersed in the process for those five days.) In the next couple of weeks we’ll be hearing the first cut of the music; I can’t wait.

I didn’t take a lot of pictures because I was caught up in the work, but here’s a little peek into the week: 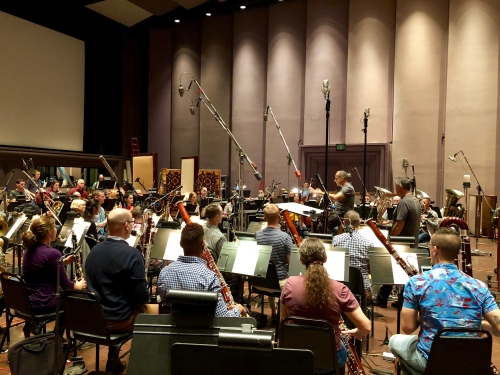 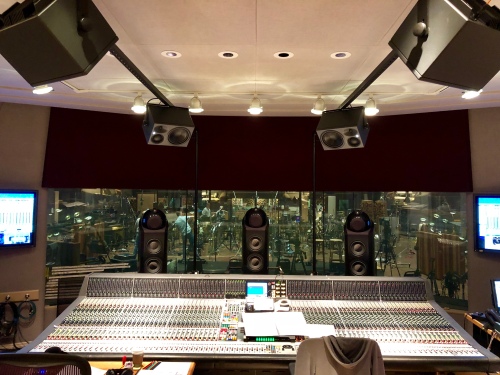 A view of the recording booth looking into the sound studio. 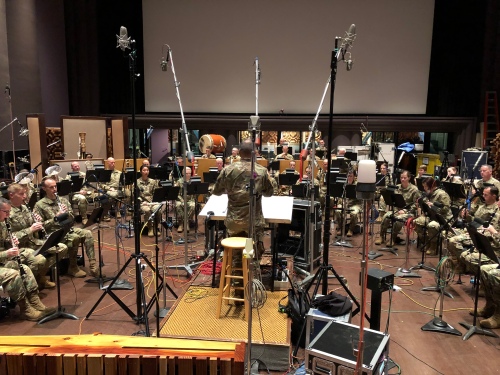 On our last day, we played music from The Force Awakens. Because… 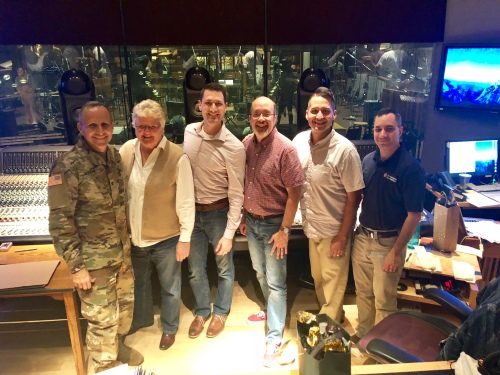 Stay tuned for updates on the recording; we expect to release it this summer!

The culminating event for this program was a concert in Torrence, CA with the above composers in attendance. Additionally, award winning composers Jeff Beal and Laura Karpman came to the concert – Karpman to hear the work the Band commissioned from her – Brass Ceiling; and Beal to conduct music from his score to the National Geographic mini-series The Long Road Home.

As the tour continued, we made our way southeast into Arizona, ending in Phoenix. 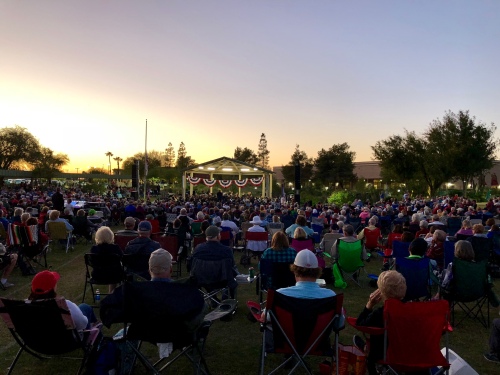 Our one outdoor concert of the tour in Sun City West. 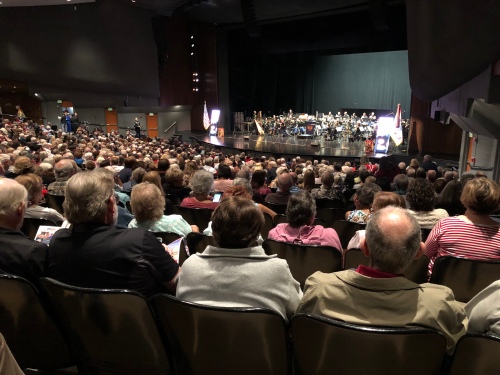 Another packed house at Citrus College located in Glendora, CA.

Overall, it was a tour to remember – one that will be tough to beat. In a month we head up to the Northeast, performing close to where I grew up and went to college. I’m expecting to see a lot of friends and family; should be another great tour! 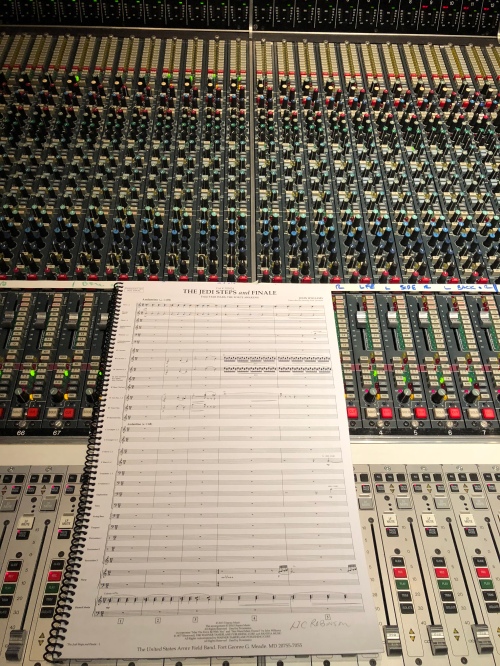 I had to geek out and take picture of the Force Awakens score there at Skywalker.