Last month, I accompanied the Soldiers’ Chorus of the Army Field Band during their goodwill mission to Puerto Rico. In the aftermath of the devastating hurricanes that hit the island, it has been a slow recovery. But, what was evident during our short time there is that the people of Puerto Rico are resilient and can truly serve as an inspiration to us all.

The Army Field Band’s main mission is to perform for the American People, lifting their spirits and creating a connection between them and their Army. The citizens of Puerto Rico – American citizens – are just as entitled to hearing the “Musical Ambassadors of the Army”; we felt that now was the right time to go – to lift their spirits and let them know that we stand with them as they recover from the hurricanes. While my involvement was minimal at best – mainly providing any “top cover” they might need while allowing the enlisted conductor to lead the concerts – it was a most meaningful and emotional mission. 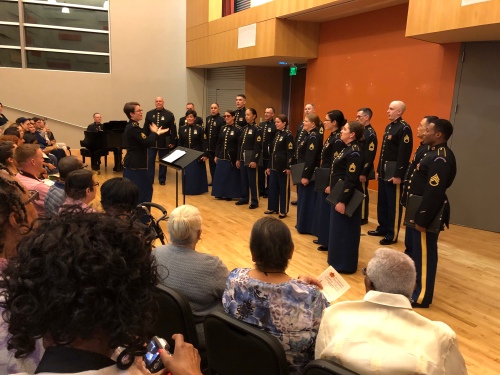 The Chorus’ first concert was at the Puerto Rico Conservatory in San Juan. The recital hall was packed with students, faculty, and members of the community. From the opening number, “Presciosa”, which drew smiles and surprised looks, to the three pieces arranged by Puerto Rico’s own Guarionex Morales-Matos, which elicited a huge ovation, to God Bless America – we knew that the decision to come to Puerto Rico when we did was the right one.

Here’s the Chorus performing in San German at El Convento de Santo Domingo de Porta Collins, a church built in 1605. The small church held maybe 50-60 people, but it was great to perform in such an interesting, historic space in this small town.

A wonderful opportunity that emerged shortly before we left for Puerto Rico was a chance to perform at the Governor’s Mansion for his staff. They were very gracious, providing refreshments and a tour following the Chorus’ performance. Here are a few pictures from that mission: 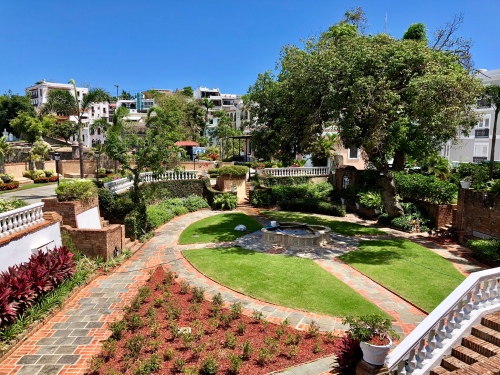 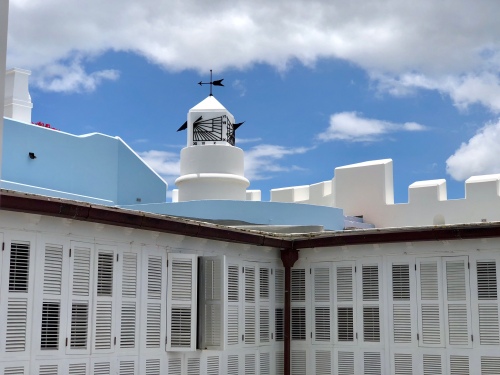 On the way out of San Juan, the Chorus performed at the DoD High School on Fort Buchanan. You never know how it’s going to go with students that aren’t music students but they were a good audience; afterwards, the Chorus worked with the high school choir. It was then on to Ponce.

The Chorus’ last performance was at a music magnet school, Escuela Libre de Musica de Ponce. To say that our sponsors rolled out the red carpet would be an understatement. When we arrived there was a band playing outside with dancers; I thought they were just rehearsing. Nope; it was for us. It was quite the festive, warm welcome! After the Chorus’ performance to a large hall, our hosts provided a reception where we were treated to a combo playing Puerto Rican music and dancing.

Also at the reception was a group of veterans who were so happy to hear and visit with the Chorus. We had representatives from WWII, Korea, and Vietnam present. It’s always inspiring when we have the opportunity to speak with our Nation’s veterans.

A wonderful surprise was that two members of the Puerto Rican National Guard Band who work at the School were there. They went through AIT at the School of Music during my five years at the “mothership.” Always great to catch up with former students! 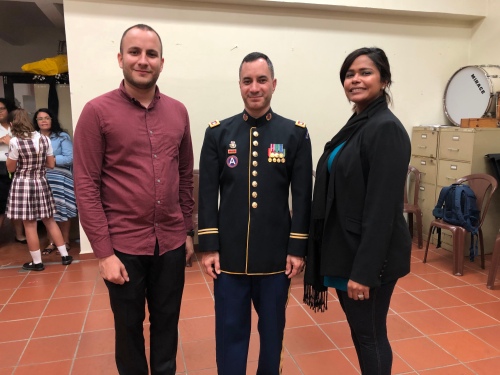 Overall, our trip to Puerto Rico was very successful. The Chorus performed beautifully and were great representatives of the Army, bringing a message of hope and positivity to the people of Puerto Rico. Hopefully sometime soon we can send the Concert Band or Jazz Ambassadors.