Last October I wrote a post about wet shaving; you can check it out here. In that post, I mentioned a Kickstarter campaign I funded from Blades Grim that scored me a shave soap and a set of scented pre-shave oils. Well, in January I started using them. Bottom Line Up Front: I’ve really enjoyed using their soap and shave oils; it was definitely money well-spent. I’m sure you’d like a little more detail so let’s get into it. 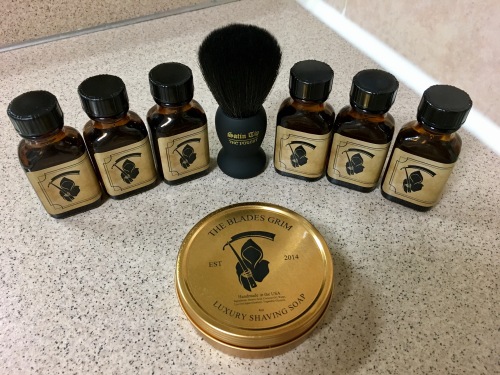 Since I started shaving with these products I’ve almost exclusively used the above synthetic brush that came with the Kickstarter set. It’s at least as good as my Edwin Jagger badger hair brush. The synthetic bristles don’t massage my beard quite like the badger hair, but it creates as good if not better lather and holds moisture really well.

So, the idea behind this set is to have maximum flexibility in regards to the scent of the lather. The soap is non-scented while each of the shave oils has a unique scent that can be used alone or in combination. When used with the Satin Tip synthetic brush, the soap created a very nice and luxurious feeling lather, providing a good surface for my two Merkur safety razors to do their work. It took me a bit to get the proportion of water to soap right, but once I did and moved to the provided shave brush, I had no problem working up a satisfactory lather. 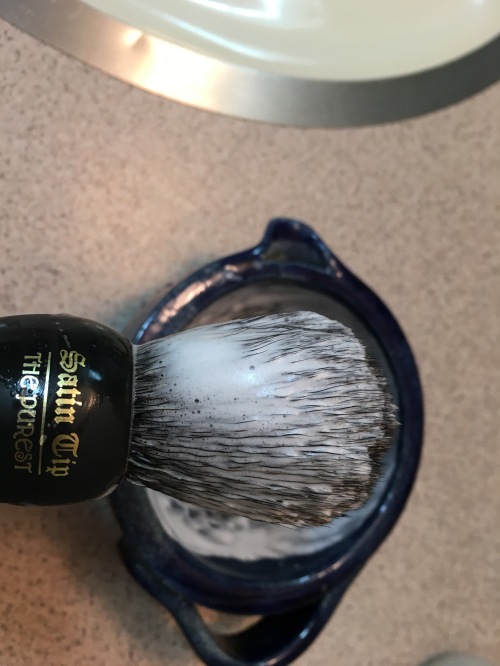 While the soap works well, what makes this set are the scented pre-shave oils. For the Kickstarter, I chose the reward with six scented pre-shave oils. I typically used four drops in my shave bowl before working up a lather with the soap. While I have my favorites, all of the scents smell good. In practical use, the scent left after a shave is subtle but definitely present, which is the way I like it. I haven’t used a scented aftershave for a long time but it is nice to have that hint of a scent that can “class up” your routine. I won’t detail each scent – some are refreshing and citrusy; others more complex. I tended to combine “Vanilla” and “Bay Rum” when using those two scents; conversely, I liked “C4” and “Sixth Sense” on their own. The company’s signature scent, “Smolder”, provides an interesting, masculine scent that I really like on its own (though it’s also nice with “Vanilla”).

The soap will last me about six months. I know I used a little too much soap the first couple of weeks as I was getting the hang of using my new shave bowl, brush, and their soap. Based on my improved technique, even shaving every day (sometimes twice in a day), I believe the soap can last me seven or eight months. Would I buy their soap and pre-shave oil again? Yes. Right now, they’re not selling the unscented soap, while only some of the pre-shave oils from the Kickstarter campaign are for sale; the current price for 1oz bottles are $12. Their scented soaps sell for around $15. You can check out their products here.