In an effort to keep up my spotty track record of intermittent blog posts, I’d like to highlight one of the mainstays of the 8th Army Band’s mission – Honor Guard Ceremonies. These ceremonies, held on US Army Garrison Yongsan (at least until the four-star headquarters moves down to Camp Humphreys), are conducted on the gravel of Knight Field in front of U.S. Forces Korea Headquarters.

You may not be surprised to learn that the ceremonial field in front of the new USFK Headquarters down at Camp Humphreys is also gravel (and really huge). 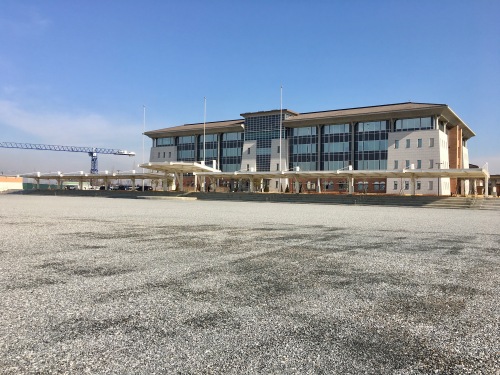 The new Knight Field down at Camp Humphreys

These ceremonies are mostly hosted by the triple-hatted (United Nations Command/Combined Forces Command/U.S. Forces Korea) senior mission commander – and are fashioned after the Old Guard ceremonies held in the Military District of Washington. Having performed many Old Guard ceremonies during my four years at The U.S. Army Band, the Honor Guard ceremonies here brought an instant familiarity. They are held to honor officials from multiple nations (though mainly U.S. and Korea) that fall under the auspices of one of the three four-star commands (UNC, CFC, or USFK).

The ceremony begins with the Band leading the Honor Guard onto the field (which is different than MDW ceremonies where the Band is already pre-positioned on the field for the march-on of the troops). After the formation dresses and aligns, the Band sounds “Fix Bayonets” and the Honor Guard affixes their weapons with bayonets to the beat of a drum.  Once complete, the Band performs pre-ceremony music.

At this point, it’s similar to many Army ceremonies; though, the Commander of Troops (the Honor Guard company commander), does not have a staff on the field like most large Army ceremonies. If the ceremony is a change of command, there will often be a wheeled inspection – the Band always appreciates it when the inspection is done with a vehicle rather than on foot!

Change of Command between GEN Scaparrotti and GEN Brooks

To end the ceremony, there’s of course a Pass-in-Review. The special music (the music performed after the troops have marched past the reviewing stand) varies based on the ceremony. It could be the U.S. Army Song, the United Nations Command March, or on a few occasions each year, all ROK and U.S. Service Songs…all eight of them. On those occasions, I always make sure I warm up my shoulders for the mini-concert to come!

I like doing Honor Guard ceremonies because they do a good job capturing the pageantry of military ceremonies while providing an opportunity for a greater degree of precision because it’s basically the same format with the same key players (the Honor Guard Commander, me and the Band, and the Honor Guard platoons).