Last week, after months of coordination, I was able to finally travel to Jordan to meet with the Jordanian Armed Forces Band leadership and their Music Advisor from the British Military Advisory Team.  While our good friends from the UK are embedded with the Jordanians as advisors and trainers, the Jordanians are interested in supplementing this with training at the U.S. Army School of Music.  My trip to Jordan was a direct result of them contacting me while back at the School of Music when I was serving as the Director of Training.  Since I knew I was coming to the area, we tentatively planned to meet in person.  It took some doing to line up our schedules (including accounting for Ramadan), but I was finally able to make it out last week.

I was picked up at the airport by Major Guy Booth, the lead music advisor and a band officer in the British Army, and taken to my quarters where I got some rest after being up most of the night.  The following day, we stopped at the British Military Advisory Team offices so Guy could handle some paperwork while we had some wonderfully strong coffee.  Once we took care of some coordination with the Jordanians, we made our way to their facilities.  What I immediately noticed while we drove around was the amount of hills and actual trees.  I almost forgot what it was like to have terrain features!

When we arrived, I was greeted warmly by the staff officers of the JAF band program as well as their commander.  They made me feel most welcome as I first met with the commander before taking a tour.  I was able to observe several groups rehearse to include a string orchestra and a couple of bands.

It was great to hear our Jordanian friends play, and was impressed again with the commitment by the musicians and their officers (as I was with the Qataris and Kuwaitis) because unlike with Western military bands, these Soldiers start from scratch when they enter the service, most of the time without any musical background; they train for two years and are then placed in a band.  It is quite a challenge (and glad it is one I do not face as a band officer!).

Of special note was the tour they gave me of a building currently under construction that will house the first females to join the JAF Bands.  This fall, 50 women will train at this new facility for two years – just like the men – and then form a band.  Another 50 will follow shortly thereafter.  The lieutenant colonel who is the head of training hinted that it is quite possible the women will be better because of their education level; this, he said, could create some healthy competition.  Indeed it will!

After my tour, we sat down with the commander and talked about a possible way ahead.  We hope to have a couple of their officers and Major Booth come out to the States to visit the Army School of Music and observe our training first-hand; this will help them decide which course of action would be best for their musicians and leaders.  Once we finished our meeting, presentations were made — they gave me a plaque, a tie, and a head scarf or Keffiyeh; I presented them with CDs from The U.S. Army Band and The U.S. Army Field Band.  Their gifts for me seemed so much more interesting then mine for them… 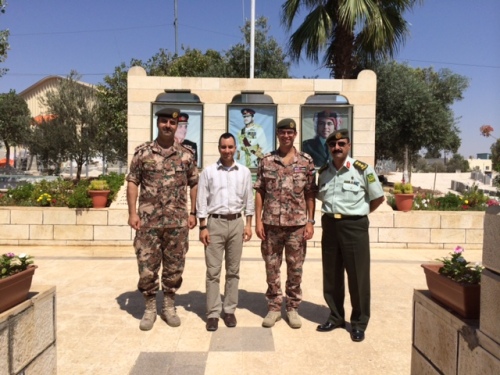 Once we said our goodbyes, Guy took me to his apartment for a pit stop before doing some sight-seeing.  It was then that I met his wife (an American) and their daughter.  As it turns out, she is from Northern Virginia.  After some talk of home, Guy and I went to a wonderful spot to take pictures of the city and see some Roman ruins.  Amman is an interesting city with a history that is truly breathtaking.

The view from our elevated position was amazing.  First off, in the middle of what you would expect Amman to look like is a Roman theater, built during the reign of Marcus Aurelius between 169-177 AD.  It’s truly astounding how it was built into the hillside and remained so well intact. 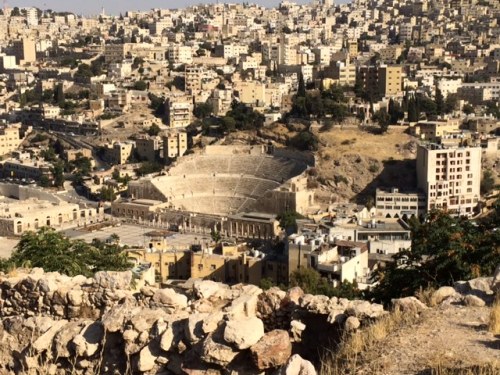 What almost steals the show, however, is the humongous Jordanian flag in the middle of the city.  You know how in the U.S., car dealerships will fly a big flag to attract people; they have nothing on the Jordanians…

After out sight-seeing, we made our way to a bar to have a beer.  Yes, a beer.  Yes, I enjoyed it.  Then we went to a wonderful restaurant to have some traditional food and hear a band play.

It was the perfect end to a wonderful trip.  Hopefully, I’ll be able to play host to Guy and his Jordanian colleagues next spring when they visit the U.S.