So, I’m a little late writing this post…A couple of weeks ago, the Army Ground Forces Band (FORSCOM Band) sent their cover band to the area to perform for troops around the Fourth. This was the trip I started planning a couple of weeks after I arrived, and it was great to finally see it happen.

I knew the Loose Cannons was going to be good, but you never know until they start playing and you hear that first vocal. As expected, they were fantastic, performing an updated set list. The first full day in country, the band worked with the contracted sound and lighting guys in the venue they were going to play in on the Fourth – a large, air-conditioned “tent” that sounded like a gymnasium. The position of the stage was probably the worst place it could be acoustically, and during the initial sound check, the sound guys had a terrible time getting the band to sound like…the band; despite the fact that the event planners wanted the band surrounded by games and activities like a carnival, we decided that we needed to move the stage. Though the picture wouldn’t be as nice, the music would be a lot better…and it was.

The band’s first job, however, was the following day on Camp Arifjan at the outdoor MWR stage. The band was picked up at their billeting by MWR and driven to the job site, and then with the assistance of the MWR crew, set up the stage and ran a sound check in temperatures well over 100 degrees. But, despite the heat and being jet-lagged, the band got their work done in preparation for the concert.

This is probably a good time to mention that, along with the great MWR crew transporting us everywhere and helping with set-up and tear-down, we also had a security detail with us. When the General is in town, often times his security detail will tag onto MWR events and provide security for the “talent.” This was the case here. What those great professionals really provided was a piece of mind and expedited travel on and off base. They were great to have around…and it was kind of cool to have our own security detail…

Anyways, the first concert went off pretty well for a first concert. The crowd grew as the band played despite the insane heat and the band was able to get a show under their belt.

One show down, the band was ready to perform their next show on Camp Buehring – a more austere post located not far from the Iraqi boarder. Unfortunately, as we prepared to head out, the winds on Arifjan were very strong; this signaled that the winds on Buehring would be twice as bad because there are few buildings there to block it. Sure enough, the MWR personnel on site called and said that there was a dust storm on Buehring and that it would probably not clear up in time for the band to sound check and do the concert; so, I made the call to cancel. As tough as it was to drop a performance with the band in country for a limited time, it made no sense to drive up there and risk ruining equipment and putting personnel at risk when there wouldn’t be many people out there anyways.

So, the next day the band went out to Ali Al Salem Air Base, which is one of the main places we use to fly in and out of Kuwait. Although there are Soldiers stationed there, it is predominantly Air Force. For this mission, I decided to have the band perform in the USO-styled recreation center instead of the indoor theater. The reason was simple – there would be people at the rec center, or as it’s called the Drop Zone – and there was a good crowd there, made up mainly of Marines and Air Force personnel with a mix of Soldiers and Civilians. These were people that either worked on Ali or were waiting for their flight.

At the Drop Zone on Ali Al Salem

The next day was one of the anchor missions for the band’s visit. For the last few years, the U.S. Embassy in Kuwait has put on a Independence Day party for Service Members and Embassy staff; I arranged to have the band be the live entertainment for the event. When we arrived, my point of contact met us at the inner gate to help us get through security with all of our equipment. Once through, the band and MWR staff unloaded our stuff and set up the band in between a four trees that provided a little bit of shade.

The compound was set up for the party, with an inflatable water slide, games, and plenty of food. The whole event was put together by the Embassy, the Association of the United States Army, and several restaurants. Once the band was set up and sound-checked, they relaxed for a bit as troops began to arrive. There were a couple hundred Service Members from all branches plus members of the Embassy staff.  Among the troops in attendance were a few people from the USARCENT G1 section, with whom I sat during the evening. Also in attendance was Mike Seals – a former Army Musician who lives and works in Kuwait. He’s been a great help to myself and past Band LNOs, and it was great to finally meet him face-to-face.

As you may know, the U.S. Embassy is considered U.S. soil; so, alcohol is allowed on the compound despite being in a “dry” country. As the troops arrived, an announcement was made that an exception to policy for General Order #1 (no alcohol) was granted for those serving on all of the camps except…Camp Buehring and Camp Arifjan. I got over it; plus, I was working so I probably wouldn’t have had a beer anyways…probably.

The band performed two sets for a large, enthusiastic crowd. In fact, before the end of the night, I was approached about bringing a band back for future events. 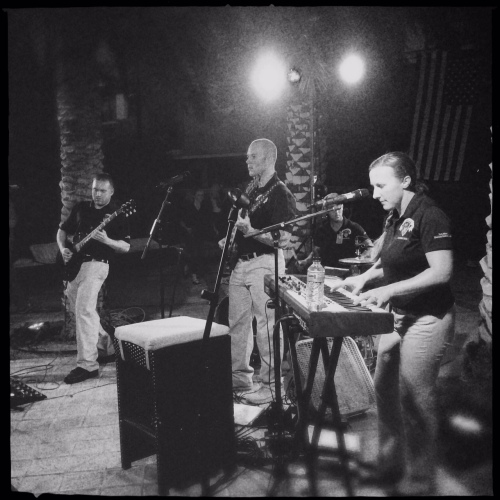 After the performance, members of the G1 team posed with the band for a picture. 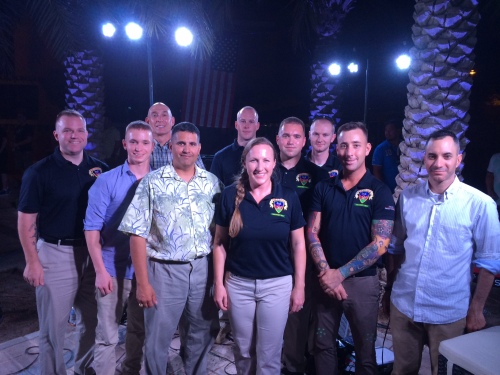 On the Fourth, the band was back on Camp Arifjan to perform in the aforementioned tent that they had sound-checked in that first day. The acoustics were still boomy but much more forgiving, and the band put on a good show despite the carnival going on around them. It was like performing at a fair…inside a tent…in the middle of the desert.

Loose Cannons on the Fourth

Early the next morning – and I mean early – (like 0300 early) we were up for our drive to the airport and our flight to Bahrain. One thing I forgot to mention was that this entire trip took place during Ramadan. If you don’t know about it, look it up; the long and the short of it is that those who practice Islam fast from sun up to sun down during the entire month of Ramadan. What does that mean for us? Once off base, we play by the host nation’s rules – while in public, no drinking (anything), no chewing gum, and no eating. So, normally when you get to the airport in the early morning, you go through security and grab breakfast at the coffee shop. Not this time.

By the time we got on the plane, I was quite hungry; but, I was expecting to not be serviced any food. However, to our great surprise and delight, the refreshment cart did come through, providing water and juice to those that wanted it. (Of course there were several people who did not take the food as they were observing Ramadan.) They also provided a pastry, which the band members scarfed down in record time.

Once we arrive in Bahrain, it took some time and convincing to get through customs. First, they asked for our passports, which we didn’t have or need. Each country has rules for what it requires for people to enter; those rules are kept up to date on a central site. The rules for military on travel orders like ourselves was clear. No passports. Once we convinced them of their own rules, we had to go through customs with all of the band’s equipment. All of the paperwork was sent ahead of time so it was just a matter of convincing them (again) that passports weren’t required and filling out some forms. After waiting for a bit for our ride, we made the journey to the Naval Station to grab a proper breakfast.

While Bahrain’s temperatures weren’t as high as Kuwait, the humidity was extremely high. It actually made me miss the desert weather. On our way to the performance site, we made a couple of stops – first to perform for Soldiers that would be on duty during the evening concert. The band performed a few songs for the small group of Soldiers in the tiny DFAC. It was the first time an Army band had performed on Bahrain. Before then, they had only seen Air Force and Navy bands. 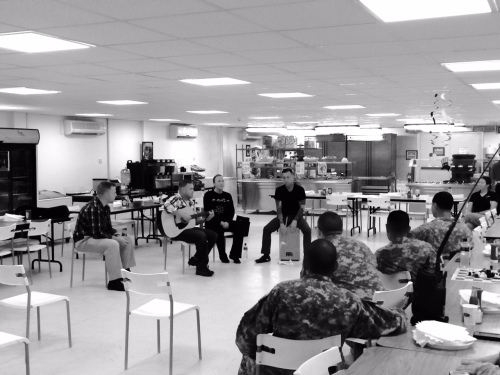 Performing for Soldiers in a small dining facility.

After having something to eat, we were back on the road to see the Tree of Life – a lone tree in the desert that has become a part of local legend as it continues to thrive despite having no known water source. The tree is approximately 400 years-old; trees and shrubs of Prosopis are extremely well-adapted to arid climates with one of the deepest root systems known.

The Tree of Life

Once we took some pictures, we got back in the vehicle and headed to the performance site. If it was a cooler day, I would have liked to stay longer; it was not cool.

That evening, the band performed on an outdoor stage that was under cover. Besides the Embassy, it was their largest crowd. They were quite enthusiastic…though part of it could’ve been that (like in Qatar) Service Members could drink three alcoholic beverages in a 24 hour period. I did not have drink…though I did think about it. 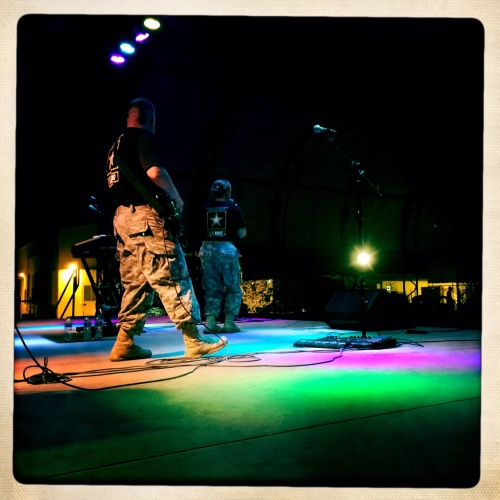 What this trip did was affirm for me why we need bands to come into theater. People need connections to stay motivated. Soldiers have each other, they have their loved ones with whom they can communicate most of the time, and they need something else – fuel. Music can provide that fuel, and music performed by fellow Service Members provides a unique connection that cannot be described. Unfortunately, I don’t have another band coming into theater until I’m gone, but I’ve been working to have more bands come over the next 6-12 months. Especially as things in the region become more and more…fluid…and everyone works longer and longer hours under greater and greater stress – in my opinion, this is when military bands are needed in theater the most.

One response to “Celebrating the Fourth”